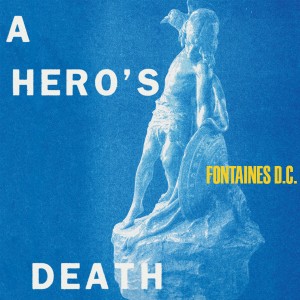 Barely a year after the release of their hugely acclaimed debut album 'Dogrel', which earned a Mercury Prize nomination and Album of the Year 2019 at both BBC 6Music and Rough Trade record store, Dublin’s Fontaines D.C. have returned with an intensely confident, patient, and complex follow up album. 'A Hero's Death' arrives battered and bruised, albeit beautiful - a heady and philosophical take on the modern world, and its great uncertainty.

Martin says: Following the moody brilliance of the universally lauded ‘Dogrel’ was never going to be easy. Such a weight of expectation! Add to that a relentless schedule that goes with maintaining the momentum of success and a lifestyle that stretches minds and bodies to the limit (all too often beyond) and Fontaines D.C. could well be forgiven for buckling under the pressure. They certainly weren’t immune. Instead of blunting their creativity however, they channelled the world weariness and cynicism into their music, giving darker breadth and depth to the snarl and vigour of their debut. Grian Chatten is as poetic and articulate as ever, his wry observations irreplaceable, but here they are shot through with defiant nihilism and a wish for independence, from everything and everyone.

They cite the Beach Boys as an influence on this album, but, while their chopping, post punk growl certainly has added harmony and changes of pace for sure, this ain't surfing weather. Where they do throw in a ballad, the gorgeous drunken drawl of “No” that closes the record, it's under leaden Dublin skies. The glorious, rolling sneer of “Televised Mind” and the tortured glam of the title track are perhaps other standouts, but then this album is full of them. All killer, certainly that.