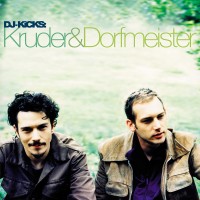 Smoke it! Feel It!

The slo-beat pioneers Kruder & Dorfmeister of Vienna are among the hottest producers in the dance universe. Even though they only produced two unreleased maxis, big names like Count Basie, Bomb The Bass, Alex Reece or United Future Organization had some of their tracks remixed by these exceptional producers. Their productions on compilations of Ninja Tune, SSR and Wall Of Sound are considered milestones regarding the trip-hop genre and many major companies are trying to release their debut album.

Since 1993 the two smart Austrians Peter Kruder & Richard Dorfmeister have been working together as a team and when being asked about their musical roots they name musicians like Miles Davis, Sly Stone, Brian Eno, Serge Gainsbourg or Bill Laswell. Besides this they are great admirers of the Gilles Peterson and Coldcut Radioshow of London's cult-station Kiss FM, which had a lot of influence on their musical open mindness. Their label G-Stone was able to gain outstanding reputation with its four releases and earned fantastic media reaction in international publications.

Besides their outstanding fame as producers both were able to blast even the hippest clubs on this planet with their extravagant DJ-sets. Their breathtaking mixture of trip-hop, dub, ambient and drum'n'bass is supposed to be way-leading thus supporting their cult-status. Smokin' tracks of Herbalizer, Statik Sound System, Hardfloor, Aquasky, Shantel and others are combined on their DJ-Kicks set, gathering the hottest labels from Ninja to Cheap, from Moving Shadow to Creative Wax. A dub producer helped to remix the entire material making it a thrilling club soundtrack for the 90s. By the way, during the work for DJ-Kicks and their debut album they refused remixes for U2, Grace Jones, Elvis Costello and the Fantastic Four.