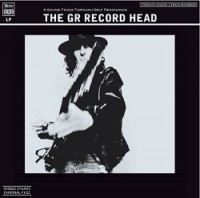 No-bullshit underground free-rock and proto-punk dosage featuring a multi-piece line up of GRs !

Once again, the album comes out outside of the standards, with no other backing than GR himself on all instruments plugged into overheated tubes, then a few dusty razor-like moving coil transducers, a mixing board built like a Panzer and an analog 4 track reel to reel recorder from another age.
GuitaRazing, frenzied riffing and cranked soloing vagabondage on corroded strings, mesmeric tone, acid rave ups, rhythms like catapults, motorik plus deconstructive free forms, opaque vocals full of venom and fuelled by raw lines & metrics…— Now pair all that with the craft of fixing sounds onto an early 80s’ 1/4 inch reel tape and you got an idea of what The GR Record Head is all about.

The Mother of all fuckers in actual D.I.Y/Low-Fi Rock’n’roll.