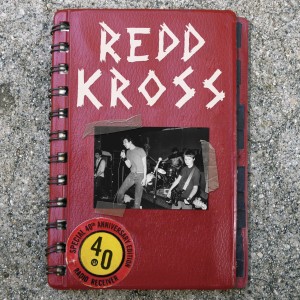 The special 40th anniversary edition of the Red Cross EP, which includes the band’s six-song eponymous debut and adds five contemporaneous extra tracks, is the most comprehensive document to date of the extraordinary birth of Redd Kross. In a single 12-month period, Jeff and Steven McDonald, two adolescent brothers from Hawthorne, CA, went from posing with cheap guitars and singing into hairbrushes in front of their bedroom mirror to recording in world-class studios and performing live at punk shows/riots that are still being pondered and written about for their pioneering cultural relevance within the Southern California punk landscape. Redd Kross incubated alongside such SoCal luminaries as Black Flag, Descendents, and the Minutemen, and this new 11-song collection which includes a live track recorded in 1979 at “The Church,” the infamous Black Flag birthplace in Hermosa Beach, CA puts in proper perspective the McDonald brothers’ contribution, at the ridiculously precocious ages of 12 and 16, to that area’s punk scene.

The demo session was recorded at Media Art in Hermosa Beach, the same studio where Black Flag made their Nervous Breakdown EP. Engineered by Spot and produced by power pop godfather Joe Nolte of the Last, these four tracks mark the first time the band had ever stepped foot in a recording studio. Notably, the demo session was paid for with 12-year-old bassist Steven’s paper route money. A couple of months later, in October 1979, the band recorded the “Posh Boy” sessions at the Shelter, a studio in Hollywood owned by Shelter Records, which was home to rock vet Leon Russell and relative newcomers at the time Tom Petty & the Heartbreakers. Engineered by guitarist Jim Mankey (Sparks, Concrete Blonde), this session produced the proto power pop punk classics “Annette’s Got the Hits” and “I Hate My School,” both of which would appear on their 1980 self-titled debut EP on Posh Boy Records.

The entire birth story of Redd Kross is being celebrated on this 40th anniversary edition of Red Cross (known to many as “the Posh Boy EP”), and these tracks sound as fresh and vital to our ears now as they did when they were originally released four decades ago.