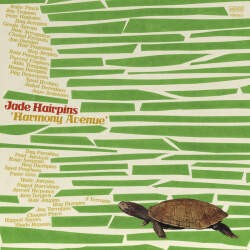 Jonah Falco and Mike Haliechuk (of Jade Hairpins) also perform together in Canadian outfit Fucked Up. Harmony Avenue is the debut album by Jade Hairpins. LP is black vinyl in jacket & printed inner sleeve + LP3 album download. CD is 4-panel wllet + 24 page booklet. Jade Hairpins sneaked onto the scene in late 2018 with a mysterious 12-inch on Merge Records and a couple of poetic sentences about hiding in trees. The label remained tight-lipped while touting Dose Your Dreams, a truly epic new Fucked Up album released on the same day.

Fast forward to 2020, when Fucked Up drummer Jonah Falco and songwriter/guitarist Mike Haliechuk burst out of the proverbial trees with Harmony Avenue, a collection of songs written and recorded in real time. Pop foraging with analog acoustics and electronic landscaping. As the project expanded, Falco took on frontman and main lyricist duties for the first time and is building a live band based in his adopted hometown of London, England. He describes the new record as “straddling the post-post-punk of something like New Order, Scritti Politti, and Orange Juice, with a primordial sense of humour and absurdity not unlike Ian Dury and the Blockheads, Television Personalities, or the Monks.” Each Jade Hairpins song was conceived in studio, then edited and crafted to become Harmony Avenue. Each vocal approach was different— first focusing on creating stories for character-based writing, and then on less absurd  motional/thoughtful/personal reflection.

The LP was originally conceived as a potential addendum to the universe of Dose Your Dreams, but the end result was more exciting than Falco and Haliechuk anticipated and deserved its own spotlight. The themes of Harmony Avenue mostly focus on contradictory behavior and double entendres as well as regret and control, revelation, support, and complete absurdity. Jade Hairpins are here to challenge, confound, and sparkle their way into listeners’ hearts and keep them coming back for more!