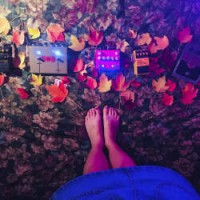 "We all convened at Postal Recording in Indianapolis to record Christmas songs for the label, and it just sort of grew from there," Harding explains. When Tadic learned that Harding was also an accomplished video maker, she asked if he would make a video for Eerie Wanda before she was due to leave town. According to Tadic, the creative sparks started flying immediately, inspiring a series of long-distance musical love letters. The initial results were raw, personal, and naked in their emotional honesty, with a purity of expression that Tadic and Harding were eager to preserve. "We made a pact that whatever came out, we wouldn't second guess it," says Harding. Adds Tadic: "We were inspired by the honesty and purity of John and Yoko singing love songs to each other.

We wrote these songs for each other, and there was no reason to overthink them or purposefully obscure the lyrics, which made both the writing and recording process really fun and spontaneous." To achieve full cohesion, strong rhythmic components were required: Best Coast's Bobb Bruno was recruited for bass and additional guitar, and 2019 Joyful Noise Artist in Residence Thor Harris was tapped for drums and percussion. "Thor was the glue that brought everyone together. He was our first and only choice for a drummer," Harding emphasized. The album was recorded in 3 3 days at Postal Recording in Indianapolis, with Tadic once again flying out from the Netherlands, and Thor Harris coming up from his home in Austin, Texas.

Melvins' legend Dale Crover makes a special guest appearance behind the kit on the album's closing track "Dreamy." Kidbug's debut LP is fueled by a deeply charged electrical love, and the band hopes to return that magical energy to listeners. "This album is a celebration of love. All of my songs with Dumb Numbers have been about endings, but Kidbug is about beginnings," Harding shared. "We hope to bring love into the world with this album," Tadic adds. "We dig love."