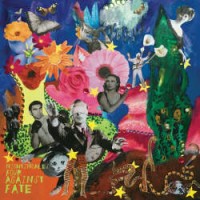 An air of the unsettled is a staple of Robert Lloyd’s career, from The Prefects’s dank dexterity and jittery paranoia of the first Nightingales’ release, Idiot Strength, onward through four decades of top-notch recordings. If the unique persona of Lloyd and crew always came across on their ten albums and countless line-ups, it was largely as an acquired taste of the musical cognoscenti. Labels good and bad seemed to feel, at one point or another, a public duty and a point of pride to release a Nightingales album before returning to the business of business. Four Against Fate is remarkable. It’s the work of what’s now the band’s longest-serving line-up. The instrumental precision of any version of Nightingales has been one of the band’s defining hallmarks, but the psychic interplay of a group can take a few albums to kick in with full majesty - here’s proof of that. The rhythm section of Fliss and Andi functions now on a purely intuitive level.

Jim’s work now ranks with that of any guitarist in modern ‘rock’ music, not just in originality, but also across an egalitarian mass of inspiration. Each member sings. Although Robert’s voice functions as the band’s superego, Fliss takes lead in several songs. Few bands today sound as much like a single unit as do Nightingales, but this group has the bonus of a distinct and credible musical language, exemplified by The Desperate Quartet, which comes across as both a medieval war march and the anthem of looming apocalypse.

When at the song’s halfway point, American classical musician Clara Kebabian’s violin and Mark Bedford’s (of Madness) double bass overtake the Robert, Fliss, Jim and Andi, it’s a jawdropper of such intense perversity that it alone defies the listener to not play the album again from the start. Not that this album lacks ‘hits’ - The Top Shelf, Everything Everywhere All Of The Time, Devil’s Due and The Other Side are stunners. Robert claims Four Against Fate is the first of his album on which he skips no tracks on playback! Finally, the world has awakened to one of British music’s last treasures. After forty years of new labels, this is the first time Nightingales have released an album on the same label as their last full-length.

1. Thicko Rides Again
2. The Top Shelf
3. Neverender
4. Wicked Winter (Lost In Highland Park)
5. Then I Felt
6. The End Began Somewhere
7. Devil’s Due
8. Everything, Everywhere, All Of The Time
9. The Other Side / On The Make
10. Simple Soul
11. The Desperate Quartet