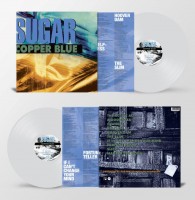 Includes the singles ‘If I Can’t Change Your Mind’, ‘Changes’ and ‘Helpless’ along with fan favourites such as ‘Hoover Dam’

Along with reaching the top ten in the UK albums chart, Copper Blue was voted the ‘1992 Album Of The Year’ by the NME and has continued to receive acclaim and a cult following almost three decades later.

For the first time, the album is presented on heavyweight 180g clear vinyl.

SugarThe Joke Is Always On Us, Sometimes - Vinyl Reissue