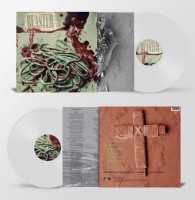 After the resounding success of their debut album Copper Blue, Sugar followed up with the Beaster EP in 1993. Unlike the pop sound of their previous release, Beaster found the group experimenting with a much darker, heavier sound.

Highlights include ‘Tilted’ which Stereogum hailed as “possibly the best song in Mould's entire catalogue” and the epic ‘JC Auto’ described by Pitchfork as ranking with ‘anything on In Utero in terms of sheer force’.

The EP became the group’s highest charting release when it reached #3 in the UK album charts in April 1993.

For the first time, the EP is presented on heavyweight 180g clear vinyl.

Side A
1 Come Around
2 Titled
3 Judas Cradle

Side B
1 JC Auto
2 Feeling Better
3 Walking Away

SugarThe Joke Is Always On Us, Sometimes - Vinyl Reissue