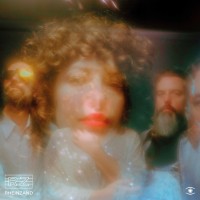 THE PICCADILLY RECORDS ALBUM OF THE YEAR 2020.

After much anticipation, our Belgian disco diamonds Rheinzand present their debut full-length album. On their self-titled record, The Belgian trio wraps the human heart in synthetic threads of modular electronic disco. 9 songs writhing on timeless dancefloors, morphing in and out of shapes of luxuriant melody and vivid instrumentation.

The album is full of classic disco and electro sounds, wielded with imposing prowess by multi-instrumentalist Reinhard Vanbergen. It’s both an exploration of dance music’s electronic genealogy and the vintage cool that has defined its different eras. Still, an organic atmosphere pervades as the blend of real instrumentation fixes a sort of retro-futurism, imagining an alternative timeline that’s a bit more exciting, more sensuous and libidinal, maybe more human, too, than our current outlook.

We start the engines with Break of Dawn, a compelling beat rises from the basement and soon we’re submerged by the pulsing bassline. Dark sunglasses on, we cruise through the night, letting flashing city lights flow into unbroken torrents of color. Blind awakens us, a splash of handclaps in the face, vivid strings and Charlotte’s trademark slick vocals enter the stage. Tantalizing sunbeams power up circuits of electronic synths blipping and beeping away.

Later down the road, we hit the Latin part of town. Porque fits enchanting vocal spells in beautiful Spanish on playful flamenco rhythms. Fourteen Again is a throwback to early electro, playing around with knobs and buttons. An oscillating synth imagines new worlds of plastic emotion. Still disco and still very cool, though. A constant velocity is sustained throughout the album by this recurring locomotive synth, trudging away beneath the action. Once in a while, we hear the deep, mighty, trembling voice of Mr. Rheinzand speaking to us in incantations. Someone’s pulling the strings here. On Slippery People, the trio cover the Talking Heads classic in a characteristic procedure of bouncy funk. We’re swirled around by the delirious glasswork of You Don’t Know Me into the hypnagogic funk noir of Strange World. Drifting through the house of mirrors after the fourth mojito.

Obey collects all these threads in a full-bodied future classic disco anthem, before Queen of The Dawn wraps up the show with a sky-bound epic of operatic choirs and ceremonious drums that lands somewhere between Kate Bush’s Aerial and Peter Gabriel’s most bombastic.

Javi says: Bringing groove, gloom and glamour aplenty, Belgian mavericks Rheinzand have crafted a powerhouse of a disco album, dragging even the most rhythmically challenged of us onto the metaphorical dancefloor.

‘Rheinzand’ had hardly been out a week before Mine and I founded The Rheinzand Alliance: an intra-Piccadilly splinter group hell-bent on securing the band a spot in our coveted top 10. We played the album a lot, and watched as our Piccadilly pals were drawn in by the seductive synths, smart bilingual lyrics and ethereal grooves. Fast-forward five months, and ‘Rheinzand’ has marched into our Album of the Year spot with practically the whole shop united under its dark and sparkling banner.

Released on the much-loved Music for Dreams label, ‘Rheinzand’ is as atmospheric as it is insistent; behind the four-to-the-floor beats, funking basslines and slick Balearic production sheen, something sinister lurks. Monstrous synth-basses squelch and stomp while distant choruses yell and clamour for our attention. Old Testament logic is carried out to its perverse conclusion on the stellar “Blind” with singer Charlotte Caluwaerts imparting that “an eye for an eye will make you blind”, while the album’s more pensive moments, “Porque'' and “You Don’t Know Me”, see Caluwaerts evoke the spirit of Julee Cruise. There’s something very Twin Peaks about the album as a whole too - ‘Rheinzand’ is like a David Lynch wet dream recorded straight to tape (or vinyl, or whatever else you're into…)

There’s bangers in them hills, too. “Fourteen Again” puts a nostalgic singalong chant over a rugged DFA-style backdrop (expertly crafted by producer Reinhard Vanbergen), while “Obey” combines batshit grit with pop brilliance, in part thanks to the sub-Iggy Pop growl of Mo Disko in the vocal booth. Rheinzand’s distinctive brand of nu-disco is ballsy and joyous - an album to celebrate and savour in a year that’s been anything but.