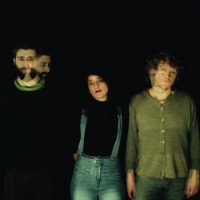 Emerging from the ashes of Shield Your Eyes in the summer of 2018, Stef Kett (guitar/vocals) and Henri Grimes (drums) started to jam on the concept of soul-spray music, enlisting bassist Marion Andrau before their first gig in October of the same year. From that first airing, it was clear something special was coming together. An untethered, emotive deconstructing of romantic soul ballads played freely at high volume. Interweaving blasts of vibrato style guitar, stirred drumming and expansive bass propel Kett’s emotive, almost strained renditions of self-penned love songs.

Yeah Well, the debut album from Reciprocate, is music with soul, rather than “soul music” in the classic sense, but it delivers the same emotional elevations. Kett explains the approach to Yeah Well’s creation, “I write our songs as sort-of ballads, but we disguise that with up-tempo arrangements. We play at high-volume but it's not ever supposed to sound brash or thoughtless, the emphasis is always on playing with good feel and sensitive touch. The intention is it should create a sense of some sort of wrenching emotional drama, and that Marion's long-held bass notes hold your hand through the arrangements, and add a sense of calm and gravitas and clarify that it's songs and not just music.” While many bands avoid the simplicity of love as the sole theme of their work, Reciprocate unburden their 2 music by embracing it exclusively, like all great pop music it grabs you immediately and completely. “I love the pursuit of trying to write love songs and, actually, I think it's become a very contrary thing to do nowadays,” explains Kett. “It's like it has been disgraced and is some kind of a no-no for an underground band to pursue writing overtly romantically themed love songs and put them to rock music. That adds a certain kick to doing it and I feel really inspired to keep writing like this.” Recorded at Spatch, London and mastered by James Plotkin, the band produced the record themselves to keep a grasp on their vision, focusing on vibe as much as perfection, while recording the tracks live.

Recording more songs that are contained on the final album, those not fitting the vibe were discarded, while opener ‘Pray Tell’ was re-recorded to get it right. This relentless focus on what the album needed to be has paid off, Yeah Well jumps out as a great rock n roll record. Take the funk-meets-no wave explosion of ‘Marion Andrau’, or the sweet, slightly distorted balladry of ‘Marble Arch’ as a case in point. ‘Yeah Well (Part 1)’ is classic blues collapsing in on itself, ‘Yeah Well (Part 2)’ is a reversed take on electric guitar from another realm which leads into ‘Hold’s bluesy, alt-rock. ‘Tascam’ is something else entirely, all sound manipulation and spoken word introduction. Nothing is as simple or predictable as it seems in the world of Reciprocate and that makes Yeah Well a unique expression of love in rock form.