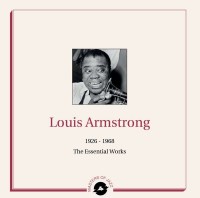 Louis Armstrong is one of the most important jazz musicians. He belongs to those who transformed the local music scene born in the Southern States of the United States - around New Orleans - into an international language.

It was in the 1920s, in Chicago, that he recorded his first records with His Hot Five and His Hot Seven. His personality and his natural enthusiasm, combined with his talent as a trumpet player and singer, helped him pave his way to success.

He traveled the United States with his orchestra throughout the 1930s and the 1940s, and appeared on television sets from all around the world throughout the 1950s and the 1960s. In five decades, Armstrong's music had evolved into jazz music, then known as a familiar universal language, popular on five continents.

The four sides of this double album revive the history of jazz, from "Muskrat Ramble" to "Hello Dolly".

A1. Muskrat Ramble
A2. Oriental Strut
A3. Sweet Little Papa
A4. West End Blues
A5. Basin Street Blues
A6. Beau Koo Jack
A7. St James Infirmary
B1. What Did I Do To Be So Black And Blue?
B2. The Peanut Vendor
B3. I'm In The Mood For Love
B4. Solitude
B5. On A Coconut Island
B6. I'm Confessin'
B7. When The Saints Go Marching In
C1. Perdido Street Blues
C2. Jeepers Creepers
C3. You Rascal You
C4. Do You Know What It Means To Miss New Orleans
C5. Where The Blues Were Born In New Orleans
C6. Russian Lullaby
D1. C'est Si Bon
D2. La Vie En Rose
D3. Kiss Of Fire
D4. Mack The Knife
D5. What A Wonderful World
D6. Hello Dolly