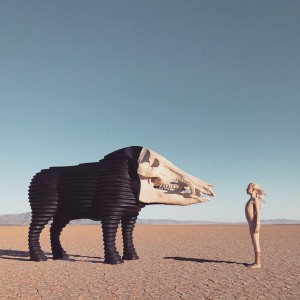 Honus Honus (aka Ryan Kattner) has devoted his career to exploring the uncertainty between life’s extremes, beauty and ugliness, order and chaos. The songs on ‘Dream Hunting In The Valley Of The In-Between’, Man Man’s first album in over six years and their Sub Pop debut, are as intimate, soulful and timeless as they are audaciously inventive and daring, resulting in his best Man Man album to date.

‘Dream Hunting In The Valley Of The In-Between’ also includes guest vocals from Steady Holiday’s Dre Babinski on ‘Future Peg’ and ‘If Only’ and Rebecca Black (singer of the viral pop hit ‘Friday’) on ‘On the Mend’ and ‘Lonely Beuys’.

The album follows the release of ‘Beached’ and ‘Witch’, Man Man’s contributions to Vol. 4 of the Sub Pop Singles Club in 2019.