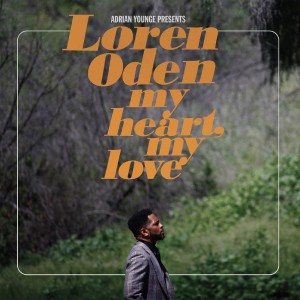 Romanticism is back and headed in a new direction with Loren Oden’s debut album, “My Heart, My Love”. Pure, with lyrical transparency and vulnerability, reminiscent of classic black soul and progressive R&B. Produced and orchestrated by multi-instrumentalist Adrian Younge, this is one of the most meticulously crafted albums ever to be released on Linear Labs. Being born into a musical family in Compton, Ca., Oden grew up in the church, studying gospel as well as secular greats like Marvin Gaye and Sam Cooke.

Throughout the years, his affinity with lyricism and vocal arranging grew, catching the ear of his long-time friend, Younge. With this connection, Oden became the mellifluous bedrock of Younge’s psychedelic sound: Oden sings lead on most of Adrian Younge’s expansive musical catalog, including but not limited, to Black Dynamite, Something About April, and Marvel’s Luke Cage. Oden is one of the premiere vocalists on The Midnight Hour alongside icons like CeeLo Green, Raphael Saadiq, and Marsha Ambrosius. With the world-renowned success of The Midnight Hour, touring for the last six years, and being musically featured on Ava Duvernay’s When They See Us, it was only a matter of time before Oden finally released his own body of work. Loren’s undeniable connection to Marvin Gaye’s poetic susceptibility paired with the genius of Younge’s soothing orchestral creations, comparable to Quincy Jones, this is the collaboration you always wanted, but could never get. “My Heart, My Love” is a cultivated body of work, for the sophisticated lover, going deep into the guarded emotions we all try to avoid. The inspiration has always come from timeless music, and Oden and Younge have created an aural treasure that is sure to live on.