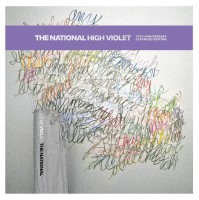 Originally released in May 2010, the critically acclaimed fifth studio album features the now-classics “Terrible Love”, “Bloodbuzz Ohio”, “England”, and perennial show closer, “Vanderlyle Crybaby Geeks.” In addition to the 10 original tracks, the triple LP package includes a third LP which includes tracks never before available on vinyl, including “Wake Up Your Saints,” an alternate version of “Terrible Love”, “Walk Off” and more.

Barry says: The National are going to cause a stir whenever any of their music gets a reissue, and the 10 year anniversary edition of High Violet did that by being both riotously essential (“Terrible Love” and “Bloodbuzz Ohio” are worth it for the entry price alone), and beautifully packaged.

1. Terrible Love (Alternate Version)
2. Wake Up Your Saints
3. You Were A Kindness
4. Walk Off