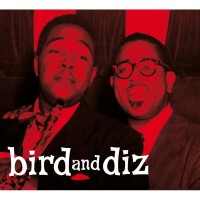 This set contains the complete original LP Bird and Diz (Verve MGV-8006), consisting of a quintet session which marked Parker and Gillespie’s last studio date ever (although they would later be recorded together live on numerous occasions, including the celebrated 1953 Massey Hall concert). This session was also Parker’s only studio encounter with the great Thelonious Monk. Two further quintet sessions recorded by Bird for Verve during the same period, one of them featuring Miles Davis on trumpet, have been added as a bonus. Charlie Parker & Dizzy Gillespie / Bird And Diz

AllMusic: “This collection of 78 rpm singles, all recorded on June 6, 1950, was originally issued in album format in 1956. Several things distinguish this from numerous other quintet recordings featuring these two bebop pioneers. It was recorded during the period that Parker was working under the aegis of producer Norman Granz, whose preference for large and unusual ensembles was notorious. The end result in this case is a date that sounds very much like those that Parker and Gillespie recorded for Savoy and Dial, except with top-of-theline production quality. Even more interesting, though, is Parker’s choice of Thelonious Monk as pianist.” (Rick Anderson)

EmbraceThe Good Will Out - Vinyl Reissue