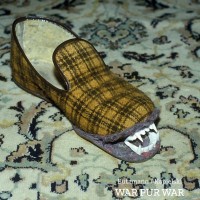 Composer, radio dramatist and performance artist Frieder Butzmann began exploring experimental music in the late 1960s. One of the pioneers of German industrial music and a member of the Geniale Dilettanten movement, Butzmann has collaborated with artists such as Genesis P-Orridge, Blixa Bargeld, and Santrra Oxyd, as well as releasing numerous solo works. Frieder Butzmann joined forces with author and artist Thomas Kapielski in the early 1980s. Most of their compositions are minimalist tracks interspersed with everyday noises and fragments of speech, as can be heard on their WAR PUR WAR album, first released on Zensor in 1987. This utterly unique work is an idiosyncratic mix of eccentric electro-pop and bizarre sonic collages and has gone on to become a sought-after collector's item. Now lovingly remastered, with refreshed artwork and two bonus tracks, WAR PUR WAR is being reissued on LP and CD on Bureau B, complete with previously unpublished photos and liner notes by Frieder Butzmann.