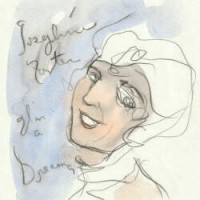 Popping up unassumingly in the second season of the popular series ‘End Of The F**cking World’ on Netflix and Amazon. This new release is sided with exclusive B-side ‘All Glow Now’. Taken from her 2013 album of the same name, ‘I’m A Dreamer’ beckons with a gentle hand, each note clear and crisp. ”Another stellar effort” (NME) the album “collects together a set of early country-esque songs” (The Quietus) and is produced by Andrija Tokic. The song sits comfortably at home in salon or saloon with its delicately arranged piano, woozy harmonica and soul-searching lyrics. “A masterclass in songwriting that perfectly invokes old Americana” Time Out // The North American Colorado based singersongwriter breathes new life into archaic forms, embodying the cultural archelogy of Harry Smith’s old weird America. She has lent her warbling mezzo-soprano and interpretive wit to nearly two decades of self-produced recordings. Her songs are rooted in American folkblues as well as classical art song and Tin Pan Alley. (E. Gades)