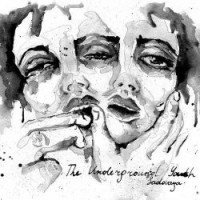 Coloured Vinyl (White) repress Ltd to 500 on standard weight. "The Underground Youth blend the sounds of shoegaze, post-punk and psychedelic rock with their own hauntingly beautiful twist." The Underground Youth is the name under which Manchester’s underground poet, Craig Dyer, has produced his records since 2009. In 2011, Fuzz Club Records started putting out his prolific catalogue, bringing to light a number of LPs and singles that had only circulated virally on the Internet. Since then, The Underground Youth, with Craig and Olya Dyer as the core of the band, have expanded to a four piece, gaining a solid international fanbase and touring all around the UK and Europe. Gideon Coe has spinned their single “Juliette” on BBC6 and they took part to the “Reverb Conspiracy – Volune One”, curated by Fuzz Club and Austin Psych Fest. In June, they rocked up the Eindhoven Psych Lab and they are set to headline Paris Psych Fest in July. Drown In Sound said of their Eindhoven set: “combining the mesmeric rhythms of The Velvet Underground - Olya Dyer's driving beats make her the new psych generation's Mo Tucker - with rippling feedback associated with Bad Moon Risingera Sonic Youth and a dash of the Mary Chain thrown in as well, they're a captivating force”