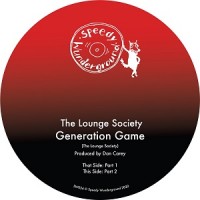 The Lounge Society are Cameron Davey (vocals/bass), Archie Dewis (drums), Herbie May (guitar) and Hani Paskin-Hussain (guitar). While some bands make music that pats you on the back, The Lounge Society make music that kicks you in the teeth . Hailing from Hebden Bridge, West Yorkshire, they are the next to emerge from the contagious 'Calder Sound', alongside Working Men's Club, The Orielles and WH Lung. An unruly bunch of talented multi-instrumentalists, The Lounge Society have pioneered a fresh approach to an eclectic range of influences spanning from The Fall and Talking Heads to The Velvet Underground and Fat White Family.

The band’s manager got in touch with the label via email – ‘and for both me and Dan it was one of those – we HAVE to do this moments’ – says (Pierre) Hall, label co-runner. All aged 16-17 years old and still in school – they needed to get permission to miss their music exams in order to come down and record. They would also need an adult in order to check them in to the Travelodge in Streatham they’d booked in order to come to the label’s HQ/studios.

But age/educational restrictions aside, when they did arrive - wow – what a racket they made. ‘They are great. Really fun to work with – and a fucking amazing band’ enthuses label boss Carey. As for the band themselves: ‘I don’t think it’s sunk in yet that we’re releasing a single with Speedy. It’s always been a dream for all of us to record with Dan Carey and release with Speedy. We love their ethos and all the music they’ve put out in the past, it’s a great scene.

On the day everything happened really quickly, we messed around for a bit, trying different amps, guitars and stuff, then when we were ready Dan said ‘shall we go for a take’ and switched the lights off, put the smoke machine on and put lasers on. Then just as we started playing the smoke alarm went off which was really funny, apparently it’s never done that before!

We went through the track and there was a real energy in the room, it was like being at a gig which is exactly what this track needed. Generation Game means a lot to all of us, and we feel it’s an ideal introduction to us as a band. To us the lyrics reflect what we’re all about – shedding light on topics and events we feel are criminally ignored - and for it to be our very first offering to the world (especially through Speedy) really helps get that across. Once we’d finished the take we all stopped dead and looked at each other (and Dan) and he just said ‘that’s it, that’s the one’. I think we were all a bit shocked but the energy was there on the recording and we completely trusted him!’

In addition – the band have also gained another new producer fan in that of The Strokes producer Gordon Raphael – who has recently relocated to Hebden Bridge (!) and caught them at a local gig: "I was seriously impressed and really enjoyed the show. For me they have it all - a great performance, they look amazing, they play their instruments like hell (and I mean that most kindly) and they take really night sharp left turns in the middle of their songs, which always grabs my interest.” Is This It? We think so. The Lounge Society. No time for sitting around.