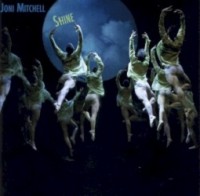 The 19th studio album from Mitchell, Shine marked the legendary Canadian singer-songwriter’s first collection of original material in nearly a decade, and came as a welcome surprise to the artist’s fans, following her well-publicized break with the music business at the turn of the millennium. Described by Mitchell to be “as serious a work as I’ve ever done,” Shine was inspired by the environmental, social and political turmoil which plagued the era of the Iraq War. The 10 tracks on the album echo Mitchell’s pensive mood—reflective lyrics and beautiful, often-minimalist, piano-driven melodies paint a somber, yet hopeful picture. Highlights include the instrumental opener, “One Week Last Summer,” featuring the versatile multi-instrumentalist Bob Sheppard on soprano saxophone; the epic “Night of the Iguana,” loosely based on John Huston’s 1964 film; the title track, featuring an appearance by longtime friend James Taylor on guitar; Mitchell’s revisit to “Big Yellow Taxi,” which feels eerily prophetic 50 years after its debut, and “If I Had a Heart,” which the New York Times described as “one of the most haunting melodies she has ever written."