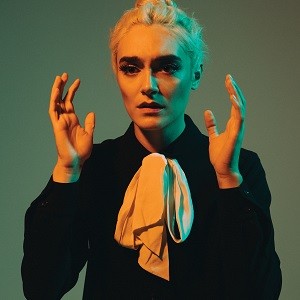 Working under various aliases since 2014 — including CE Schneider Topical, Jepeto Solutions, Christina Schneider’s Genius Grant and now Locate S,1 — Christina Schneider has explored everything from groovy garage rock to minimalist bedroom pop to Syd Barrett-style psychedelia. Buoyed by her desire to create the same “crazy, powerful feeling” she gets when she hears an ABBA or Kate Bush song, she reached again for the outer limits of pop music and recorded Personalia , her sophomore album as Locate S,1 and debut release on Captured Tracks.

Schneider spends much of the album trying to understand and expel a darkness that has come over her (and society at large) in order to live a more fulfilling life. While writing and recording the album in her home studio in Athens, GA, Schneider thought a lot about her own growth and self-worth as an artist, and where her constantly evolving and always experimental music fits in the digital age.  Environmentalism, money, power, and modern feminism formed part of that conversation, too. Throughout Personalia Schneider seeks to address how the attention economy is plaguing us with feelings of FOMO and anxiety, and is causing many of us to abandon their progressive values.

At its core, Personalia is about rebuilding, not rebranding. It’s about evolving and moving forward despite knowing the world is falling apart around you. On the peppy, dance hit “Whisper 2000” Schneider fully embraces this idea: “If you cannot behold my miracle, step away from the vehicle,” she sings with a defiant spring in step.