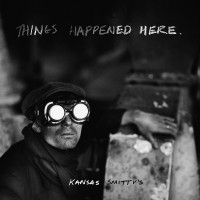 As the London Jazz Scene moves more and more towards the dancefloor, Kansas Smitty’s is the cinematic and meditative side of instrumental music. The new record from Kansas Smitty’s “Things Happened Here” is a modern classic. It’s a concept album who’s sole concept is to capture the complexity of the age we live in; lamenting its hardships and reflecting its beauty. Whilst their own-operated venue and bar was one of the conception points for the current jazz boom, Smitty’s have developed a musical voice wholly unique from what’s happening around them.

"Things happened here" is the feeling you get when you walk into an old house, an abandoned factory, or an ancient temple. It is that feeling that some combination of great and terrible things have occurred on the ground on which you now stand. It is rare, profound, and humbling. And most of all, it brings our significance or lack thereof into perspective. Because, where things happened, things will happen again.

Almost entirely written and produced by Giacomo Smith, the band leader who is at the centre of this seven piece band, and featuring nine original compositions “Things Happened Here” is the snapshot of a band reaching artistic maturity.

They launched their own bar, of the same name, on Broadway Market Hackney in 2015 which now promotes seven nights a week of live music and has hosted performances from artists as varied as Johnny O’Neil to Louis Cole. As well as international acts the venue is much more active as a hub for like minded local musicians to connect and create it has been not far from the centre of the london jazz explosion with Femi Koleso, Moses Boyd performing often and Theon Cross was an active member of Kansas Smitty’s the band until 2018.

It is a key space for the band to write and record new material. The band is composed of Giacomo Smith on alto, clarinet and bass clarinet Dave Archer on guitar, Ferg Ireland (Ashley Henry, Ruby Rushton) on double bass, Will Cleasby (Judi Jackson, Kurt Elling) on Drums, Joe Webb (Hailey Tuck) on piano, Alec Harper on Tenor and Mark Kavuma on trumpet.