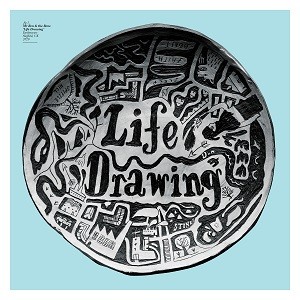 After the celestial adventures of Mr Ben and the Bens’ previous issue, band-leader Ben Hall finds all the magic he needs on earth with his new album, Life Drawing. On 2019’s Who Knows Jenny Jones?, Hall plotted the story of a young, shy Pitsmoor woman who returned from an alien encounter newly armed with serious disco-dancing know-how. Life Drawing, meanwhile, looks closer to home for its inspiration – Sheffield and thereabouts – for twelve brightly plaintive, character-driven vignettes, set to warm, acoustic, indie-folk-pop backdrops after its predecessor’s close encounters of the synth-driven kind.

A “cloudy thread of narrative” is present, Hall explains, but this time it’s left open for listeners to map routes through it. “The idea with the title is that the songs are character sketches, and their stories coalesce in a place that has a bit of all the towns in the North of England I’ve lived in. Bits of myself in the stories came out unintentionally, so I’d like it if the listener could find those semi-truths from the songs and place them into their own experiences.”

Barry says: Mr Ben moves himself and all of his Bens to Bella Union! It's a fitting home really, as they are well heeled with this sort of jangling, melodic optimism and off-kilter classic psychedelia. It's lovely stuff, and a superb whimsical counterfoil to the drags of day-to-day life.

1 On The Beach
2 How Do You Do?
3 Danny
4 Faithful Hound
5 Astral Plane
6 Minor Keys
7 Beast In The House
8 Walking To An Open Sky
9 The Wind On Spittlehill
10 Irish Rain
11 Closing Time
12 Watering Can