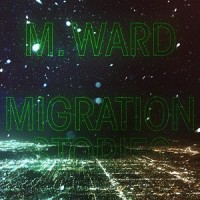 A prolific writer, producer and performer, M. Ward has established himself as one of modern American music’s most unique and versatile voices. For his tenth album he journeyed to Quebec, Canada to work with Arcade Fire’s Tim Kingsbury, Richard Reed Parry, producer/mixer Craig Silvey (Arcade Fire, Arctic Monkeys, Florence and the Machine) and Teddy Impakt. Together at Arcade Fire’s Montreal studios they recorded a collection of 11 songs inspired by stories of human migration.

M. Ward’s music has always felt intricate, intimate and other worldly. With Migration Stories he breathes beautiful life into vignettes of human flight, blurring the lines between reality and fantasy as it reckons with a world that feels more divided than ever before, even as its inhabitants grow more inextricably linked by the day.