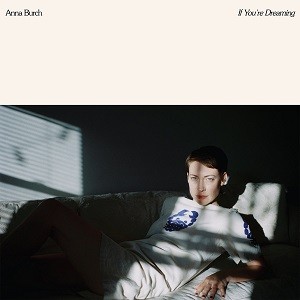 ‘If You’re Dreaming’ was tracked with producer Sam Evian in his home studio in the Catskill mountains of upstate New York. Where the first album had been a rush of inspired songwriting followed by a drawn-out process of arrangement and mixing, Burch and Evian worked with self-imposed time limitations to establish a sharper focus and get to the core of the new songs. The work was swift but somehow more relaxed, locking into a groove of tracking the basic elements and then expanding on the arrangements with overdubs and auxiliary instrumentation. The end goal was to present not just an assortment of new songs but craft an album that moved dynamically through an interconnected emotional arc.

With recurring themes of isolation, weariness and longing, these songs deliver that emotional arc with a delicate but uncompromising execution. Burch’s intrinsically catchy songwriting dials down the urgency of her debut a notch, taking a turn towards airy, jazz-voiced chords, floating reverb and an expansion of the sonic palate with unexpected instrumentation. The soft-rock bass grooves and understated saxophone lines of ‘Not So Bad’ push an impressive pop structure into exciting new territory and the sweetly melancholic Tell Me What’s True centres around muted electric piano, its languid but metered vibe recalling the gentler side of Carole King.

The nuance of arrangements that could sometimes get buried on debut ‘Quit The Curse’ rises to the surface on patient, opulent tunes like ‘Every Feeling’ and in the twelve-string guitar hooks of ‘Party’s Over’. The album drifts dreamily as much as it hones in with a sharper clarity on some of Burch’s most personal songs. Even at its most introverted, ‘If You’re Dreaming’ is always warm and present. It’s a deliberately drawn chapter of Burch’s work, trading in the wild-eyed and sometimes neurotic party hopping of ‘Quit The Curse’ for a more solitary walk after midnight. Daring and clear- headed, these songs cut deeper in their subtleties. ‘If You’re Dreaming’ moves with intention, taking its time revealing new layers of sophistication and growth in Burch’s always charming songcraft