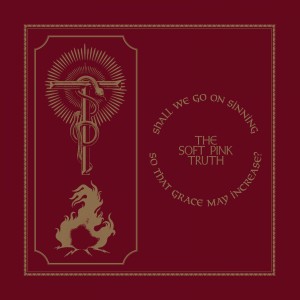 The Soft Pink Truth is Drew Daniel, who also forms one half of acclaimed electronic duo Matmos. Started as an outlet to explore visceral and sublime sounds that fall outside of Matmos’ purview, it draws on knowledge of rave, black metal, and crust punk obscurities to subvert and critique genre expectations. On this record Daniel takes a bold and surprising new direction, moving beyond simple plunderphonic sampling and opening up a genuine dialogue with other musicians, Daniel left room in his compositions for moments of genuine surprise, capturing the freeform, communal energy of a DJ set or live improvisation session more than a recording project. It feels ethereal but full, both ambiently hypnotic, and deliciously danceable. Shall We Go On Sinning… began as an emotional response to the creeping rise of fascism around the globe.

Daniel explains: “The election of Donald Trump made me feel very angry and sad, but I didn’t want to make ‘angry white guy’ music in a purely reactive mode. I felt that I needed to make music through a different process, and to a different emotional outcome, to get past a private feeling of powerlessness by making musical connections with friends and people I admire, to make something that felt socially extended and affirming.” Those musical connections make this record what it is; vocals provided by the chorus of Colin Self, Angel Deradoorian and Jana Hunter form the foundation of most of the tracks, sometimes left unchanged as with opening line (“Shall”) or the sensuous R&B refrains on “We”, other times shrouded in effects, morphing into new forms. Stately piano melodies written by Daniel’s partner M.C. Schmidt as well as Koye Berry alongside entrancing vibraphone and percussion patterns from Sarah Hennies push tracks toward ecstatic and melodic peaks, while rich saxophone textures played by Andrew Bernstein (Horse Lords) and John Berndt are used to add color and texture throughout. The album’s overall sound was in part shaped by Daniel hosting Mitchell Brown of GASP during Maryland Deathfest. Daniel borrowed Brown’s Roland Space Echo tape unit which he then used extensively throughout to give the album a flickering, ethereal quality. The melodies, jubilance, and meditative nature of album provides a much-needed escape from the contemporary hell-scape. The process of creating Shall We Go On Sinning So That Grace May Increase?, in and of itself, is the Soft Pink Truth’s way of championing creativity and community over rage and nihilism.

The Soft Pink TruthWhy Do The Heathen Rage?