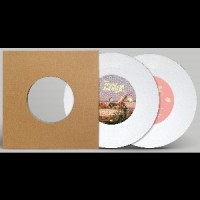 Too Slow To Disco regulars will remember Vibes4YourSoul’s name from his standout remix for L’impératrice on last years “TSTD – En France” compilation. He is one of the edit-producers that specialized in those slow jams and mid tempo tracks on the record. With a lot of SOUL, Vibes4YourSoul (aka V4YS) is a French DJ and producer who blends elements of disco, rare groove, afro-Latin and soulful indie together with the deeper edge of contemporary house and nu disco sounds. The four reworks on this Double 7 Inch reflect all these styles, held together by Vibes4YourSoul’s lush, mellow and funky production.

From of a long and passionate reflective experience, his DJ sets are eclectic journeys through different times and styles, with groove weaving it’s way through each song, as a common thread. A member of Yuksek'sPartyfine crew, he's regularly revisiting old or contemporary tracks through edits and remixes, widely shared and played by numerous DJs.