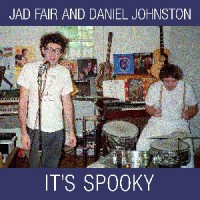 Recommended If You Like: The Beatles, Satan, Half Japanese, Roky Erickson, Wesley Willis, Jandek, Moldy Peaches, Butthole Surfers. Limited pressing of 1500 on Casper White Vinyl 2LP + 7" Flexi, comes with Download Card. First time on vinyl in 30 years! Bonus Flexi-Disc features previously unreleased Daniel Johnston classic “I Live My Broken Dreams”. Gatefold jacket with printed innersleeves containing extensive liner notes from Everett True, Jeff Feuerzeig (The Devil & Daniel Johnston, director), Jad Fair and Kramer. Sound restoration and remastering by Kramer. 32 songs including bonus track “Ashes On The Ground”. I first heard Daniel in 1985. Half Japanese had a show in Austin and Daniel's manager Jeff Tartakov gave me a tape of "Hi How Are You?".

I loved it and began corresponding with Jeff and Daniel. A few years later I was in NYC to take part in a recording session of Moe Tucker at Kramer's studio Noise New York. Daniel was at the studio and he and I became friends. Daniel recorded two songs with lyrics I wrote. He recorded "Do It Right" for Moe's album, and "Some Things Last A Long Time" for his album "1990". Soon after his time in NYC I invited him to my home and we had a week to record the songs for "It's Spooky". I considered Daniel to be a genius. I am so grateful to have had the opportunity to work with him. I'm so grateful to have it released again and it's sounding better than ever thanks to an amazing mastering job by Kramer. Jad Fair… "This is the sound of friendship, of love unfurling.” Everett True // “I never saw anything like the force-of-nature that was Daniel Johnston. Ever. And i'm sure I never again will. But there's more than just one force-of-nature in American music; Jad Fair is a hurricane unto himself.” Kramer