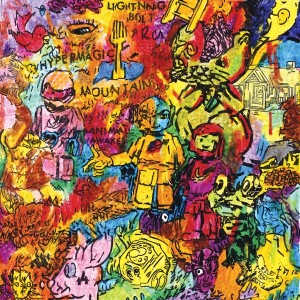 ‘Hypermagic Mountain’, Lightning Bolt’s fourth album has been unavailable for nearly a decade since its 2005 release.

Back as a double LP including a full drawing by Brian Chippendale as the D side etching.

Recorded at Machines with Magnets and Lightning Bolt’s home by Dave Auchenbach.

Lightning Bolt play with abandon that is unmatched and remarkably undiluted and this album is just one more example of that raw power and sound.