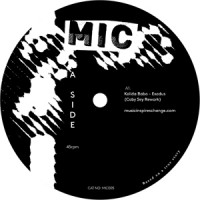 Remixes of Kolida’ Babo’s shamanic opus “Exodus”. First up is a reinvention from Coby Sey - the Lewisham, South London musician who's founded the Curl collective alongside Mica Levi and Brother May and collaborated with Babyfather, Klein and Tirzah, noted as one of the 50 best new artists of 2019 by the guardian. The tone and atmospherics of the original’s combination of synthesiser and woodwind are sliced into ghostly, mesmeric fragments and refitted in layers around loping, propulsive rhythms with something like UKG's steppiness - languid despite being uptempo, bright and almost gleeful despite the inescapable mournfulness of the source material.

Who’s The Technician? of Ireland's Wah Wah Wino label - turns in a remix that wrestles with the original 7+ minutes of relentlessly captivating deep digi-dancehall, less of a remix than a rebirth cycle, with the latent soul-splitting lament of Kolida Babo’s duduk copy-pasted onto a delirious mercurial lead rotating through hedonistic ecstasy and burnout; a snake-eating-its-own-tail of a version. cracking open the third eye with a crowbar, plus a post-apocalyptic, ruthlessly space-invading dub that blasts the remix’s scale out to the starkest retreats of the universe in search of...who knows what?! Majestic stuff indeed.