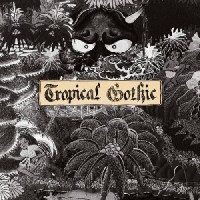 CD1 Tropical Gothic
Mike Cooper studies different approaches to his method of uniting guitar and field recordings into a constant stream of sound, where he delivers chaos and melody – not necessarily in that order. A series of shorter pieces open the album. Each of them offering a myriad of images and sensations, between the enigmatic and terror (“The Pit”), joy, happiness and freedom (“Running Naked”) or pure contemplation (“Onibaba”). The album closes with its 18th minute magical piece “Lelong & Gods Of Bali”. A mix of ambient exotica music, silent film soundtrack and distorted rhythms that dance around Mike’s guitar. It keeps reinventing and transforming itself throughout those eighteen minutes, summing up the dexterity and muscle of Mike Cooper’s music of the last two decades.

CD2 Tropical Gothic: Live at Café Oto
‘Tropical Gothic - Live At Cafe Oto’ was performed as a live improvised version of Mike’s release of the same name. Joined on stage by Clive Bell and Sylvia Hallet and performed alongside three of Mike’s videos - Ko Lanta, Walking In Ubin and a mash up containing excerpts from some of Mike’s favorite ‘tropical gothic’ films ( Onibaba, Opera Jawa, Kwaidan, Tabu & White Shadows In The South Seas). Both Clive and Sylvia play an array of Asian and ‘exotic’ instruments; both are improvisers and have been playing together on and off over many years. Sylvia had collaborated with David Toop on his opera Star Shaped Biscuit, a work that might also be considered tropical gothic(?) and Clive Bell, an international traveller, writer and expert player of the Japanese Shakuhachi flute, as well as other Asian blown instruments, is very familiar with Mike Cooper’s musical excursions into Ambient/ Electronic/ Exotica.