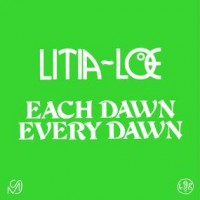 New import label from Seance Centre & Smiling C, Toronto... linking up with Melbourne's Left Ear Records on this one.

LITIA=LOE’s Each Dawn Every Dawn is a nearly-lost existential house anthem from Chicago’s second generation, heavily under the influence of Ron Hardy, European EBM, and the struggle of daily life in the city’s marginalized neighbourhoods.

LITIA=LOE (Life In The Insane Asylum = Life On Earth) formed in Chicago amidst the burgeoning house movement of the 80’s. Leon Williams, Daryl Wilson, and brothers Grant and Simeon Rogers would meet up every weekend to soak up the sounds at local clubs like Music Box, Medusa, The PowerPlant, The Warehouse, and Frankie Knuckles’ Dance Palace, where DJs would mix everything from disco to new wave, industrial to house music. After the clubs closed, they would retreat to Leon’s basement to experiment with synths, inspired by what they had just witnessed at the clubs. Wired with excitement, they would stay up all-night, jamming and sequencing beats together late into the next afternoon.

Simeon was the technician of the group, programming drums, layering sounds, and finding the right synth textures. Leon was the creative wild card, coming up with conscious lyrics and vocal melodies and tweaking the sounds to be more expansive. Grant kept things anchored in song, composing and coming up with structures. Daryl helped compose a lot of the unreleased songs and was a great arranger and bass player, but decided to leave the band for personal reasons.

With a Tascam 8-track Portastudio, the group would cut rough tape mixes of their tunes to share with friends who would DJ the demos around town. Inspired by what they heard from groups like Nitzer Ebb, Bauhaus and Chris & Cosey, they came up with a track heavy with distortion and feedback. A tape of that track started circulating around the clubs, and legend has it that Lil Louis liked it so much he claimed it as his own. Realizing that competition was fierce in the DJ world, they decided to cut a record next time so they could lay claim to their work. This led to the release of Each Dawn Every Dawn, released on their own Facade label in 1989. The group distributed the record themselves, handing them out at clubs, and dropping them off at local shops and record pools.

At the time, the record barely made it out of Chicago, but the group did have a few chances at notoriety. Once with Rocky Jones of D.J. International Records who offered a “Blood contract” for joining the label. The group declined. In the mid 90’s they had an opportunity to open three nights with Living Colour, but the night before, one of the keyboardists got stage fright and they had to bail on the gigs.

Left Ear Records and Mixed Signals is proud to offer a new dawn for this incredible unsung group with a remastered DMM reissue of Each Dawn Every Dawn, including the original alternate mix called “The Morning After”. A redux of LITIA=LOE’s Life Love Dance EP will follow later this year.