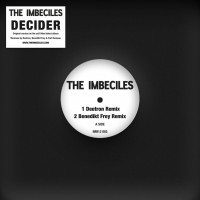 Mesmerizing, ghostly, seductive, urgent, poignant, “Decider” is about the ultimate endgame: death. This track draws you into its web and holds you there. There’s no escape. Is there anything after ‘the end?’ If there is, will it bring happiness, or just more pain

The inspiration, if you can call it that, for the song comes from the band’s own recent experiences. ‘We’ve lost a few people recently that we were close to. It does tend to make you ponder the universe, and whether you get a second act,’ says Butch Dante, guitarist.

Filmed on location in the Texas panhandle, the video will be the second of a triptych of films written by Butch, focused on the band’s main preoccupation: the fact that the world is ending and people should be kinder to each other while it does.

Now they’ve been remixed by three top bods of the dance music world: Deetron, Benedikt Frey and For Romeau all providing very different takes on their fatalist sound.

This Swiss maestro Deetron takes big inspiration from the big expansive, moody sounds of Detroit. Sam Geiser also borrows percussive influence from Chicago house whilst instilling his very own atmospheric personality, making for one hell of a ride on his remix.

Cin Cin boss Fort Romeau concludes with a decidedly different take than his textured electronic dancescapes that have made him an almost household name. Drawing out the clanging metallic bass, emphasizing the krautian repetition and snarling from behind ripped denim and safety pin-adorned boots; this is a punky-krauty-dance party folks and worth the entrance fee along!

Also included is the intoxicating original, heavy with slashing guitar lines and dark emotional content; it’s the perfect ode to our crumbling times…