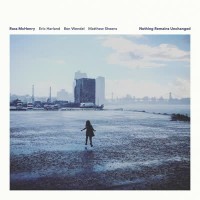 'Nothing Remains Unchanged' places McHenry's music firmly at the vanguard of modern jazz. Written in the Leighton Artist Colony at the Banff Centre for Creativity in May and June 2018, the album was strongly influenced by the majesty of this setting and the grounding presence of the mountains, which provided the solitude and space for deep reflection on both the present and the past. This album pushes Ross' unique compositional voice into new territory that is brought to life by the remarkable instrumentalists who feature across the record.

In Ross' words "I have a sense that this is an important recording for me. It feels like the jumping-off point to a new body of work, where things I have been working on for some time have come together and now many new things seem possible. It was an incredible privilege to work with such an esteemed band on this project, and their performances are really what makes this music special. I feel in part that they have shown me what is possible within my own music - it's like that when you work with amazing people, they open the door to new things that you didn't know were there."

This new album follows a period of significant activity for Ross including recent tours and major award recognition through the Marten Bequest Scholarship and APRA AMCOS Art Music Award for Excellence in Jazz. Tour dates for 'Nothing Remains Unchanged' are planned for mid/late 2020.