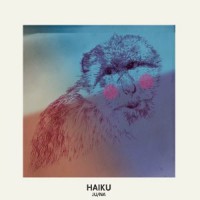 Ju/Na is a collaborative project between Juri Corrado and Nathan Dawidowicz and was borne in Berlin where both of them live. It's a conjunction of free verse and analog soundscapes - which could be described as 'analog poetry'

This debut album 'Haiku' is an exploration of contemporary narcisism which unfolds against a backdrop of different facets of contemporary life in imaginary/imagined or concrete urban spaces. Each side of the record contains three tracks - reflecting the three phrases of Japanese Haiku poetry. With a surreal language and quotes from mythology, the opus potrays the dreamy delirium of the Ego, from Love to disenchantment.