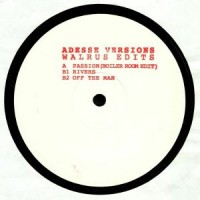 After a very limited release to a handful of stores in 2018, Adesse Versions makes another small pressing of Walrus Edits available. Featuring vinyl-only cuts of a true Los Angeles funk pioneer, often overlooked due to his infamous love songs. Starting with the electronic boogie of 'Passion', one of the tightest and most under-rated funk gems of the 1980s. This was made specially for Adesse's last Boiler Room show and became his most requested and sought after edit. The B-side takes things in a completely different direction, with the raw deep-house grime of 'Rivers' and the orchestral almost Philip Glass-esque 'Off The Man'.