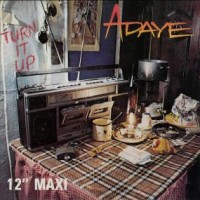 South African disco 12” originally released in 1983, the start of the country’s ‘bubblegum’ era. Adaye was a once-off studio project featuring members of Stimela, the SA supergroup formerly known as The Cannibals and at the time also recording under aliases like the Street Kids and Kumasi. As Adaye they roped in singer Al Etto and went into the studio with Heads Music boss Emil Zoghby, who shares songwriting credits with Ray Phiri on the only track they released: ‘Turn It Up’ - an eight-minute slice of guitar funk throbbing to a disco beat. Remastered from the original tapes and reissued on DJ Okapi’s Afrosynth Records.