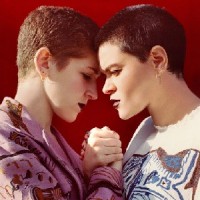 'Critically acclaimed Brooklyn duo Overcoats announce the release of their album The Fight via Loma Vista Recordings. Tempering punk energy with vulnerable vitality and irresistible catchiness, The Fight is a ten-song battle-cry. It’s the kind of record that might inspire you to quit your job, run a marathon, divorce your husband, change your life in the way you always wanted to, but needed an extra push for.

The Fight is the push. As New York-natives Hana Elion and JJ Mitchell wrapped up touring behind their critically acclaimed 2017 debut YOUNG, it seemed as though the world was collapsing around them. There was no choice but to fight. “We lost friends to addiction and to gun violence, we were battling an extremely tough political climate, and feeling the weight of existential loneliness,” admits Hana, “We had to learn how to take care of ourselves and each other in a different way.” “There was a realization that we couldn’t wait for life to get easier,” adds JJ. “The idea you have to fight for who you are, what you want, and what you hope to see in the world became poignant for us. We realized the thing to do is not to wait for life to get easier, but to start fighting harder.”