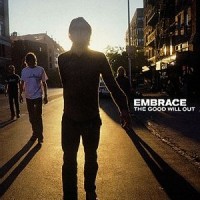 Following in the footsteps of Oasis and the Verve, Embrace became a pop sensation in post-Brit-pop Britain, breaking through in the late ‘90s. The group—hailing from Huddersfield, West Yorkshire, England—had a knack for big, anthemic hooks, which they transform into sweeping, sprawling, lugubrious rockers. This synthesis earned them a strong fanbase with their first singles in 1997, and their debut album, The Good Will Out.

Originally released on Virgin's Hut subsidiary in 1998, The Good Will Out became one of the fastest selling debut albums by a British artist, going on to sell over 500,000 copies domestically. Certified gold on the first day of release, the album hit the number one spot and spent 24 weeks in the Top 100, spawning three Top 10 singles, “All You Good Good People” “Come Back To What You Know” and “My Weakness Is None Of Your Business” together with two further Top 40 hits, “One Big Family” and “Fireworks.” Critically acclaimed across the board, NME hailed the album as the “one of the great debut albums of the past decade”.