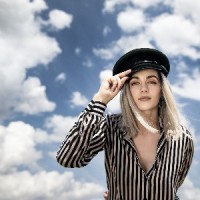 A Yorkshire farmer who led a challenging and isolated existence, caring for elderly relatives whilst running her farm in the most extreme conditions. She became an overnight celebrity after appearing in an ITV documentary, her virtues of hard work without any complaints, without any expectations of praise or credit, were something an entire nation identified with. Hauxwell is the subject of album track ‘Perfectly Planned’, whilst ‘Hellsto’ looks on admiringly at the working women of WW1 and WW2, who often go nameless, under the radar. “FORGE’ is about the small pockets of communities that are overlooked, unheard, ignored. Their ways of work and living are changing, either drying up or being sold off, and this is causing people to burn with frustration whilst also causing them to reaffirm their strengths and identities”, say Fassine.

The London trio’s distinctive take on electronic music has previously earned acclaim and support from the likes of The Guardian, The Independent, Clash and more. Yet on ‘FORGE’ they’re bolder than ever before, the instrumentation heavier and more aggressive than on previous full lengths ‘Gourami’ (2017) and ‘Dialectik’ (2016). They still follow tradition in one sense though, opting again to feature a cover, this time Paolo Conte’s‘ Max’ with guest vocals from Italy’s Fabrizio Pagni (Arqtic, Zen Circus). Recorded primarily at London’s Battery Studios, Sarah Palmer, Laurie Langan and James Hayward (Fassine) would play late into the night, adopting a much more improvisational approach than previously, “This process was far more improvisational - a lot of ideas were done on-the-fly in the studio. We had a skeletal demo, then ideas were batted out and put down.

Far fewer demos were gone through to begin with, and gut instinct was followed much more quickly. We also decided that no matter what the song, if we liked it, it would go on’’. Since their last release, Fassine have been busy on our screens, the London trio’s XTC cover of ‘That Wave’ appeared on the Sky Arts’ documentary on the seminal band, This Is Pop. Their track ‘Whatever It Takes To Help You Sleep’ played as the backdrop to Netflix’s first feature film ‘Velvet Buzzsaw’, and ‘Leaves’ was featured on Oprah Winfrey’s Queen Sugar. ‘FORGE’ literally meaning to ‘create something strong and enduring’. And with this album, Fassine have embodied the grit and grime of their personal heroes to weld into existence something that’s an industrial and hard-hitting piece of craftsmanship.