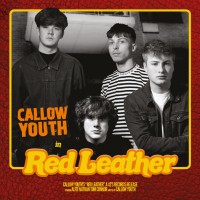 Red Leather showcases a harder and heavier side to the band’s indie-pop songwriting and welds this to clubby, baggy-influenced beats.

“Red Leather was inspired by a pair of red leather pants a girlfriend bought, which I thought were cool as sh**, and a road trip that happened around that same time” explains frontman Alfie Turner on the new song.

The B-side is a remix by Dave Pemberton, the Manchester based producer / remixer who has worked with The Prodigy and Kasabian