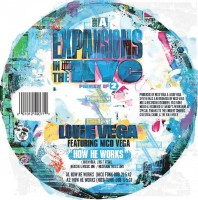 Louie Vega continues to expand the musical boundaries of house music with his unique ability to combine the essence of classic disco, soul and funk with the percussive energy that is the driving force of dancefloors worldwide. His new work is a second preview into the epic and forthcoming Expansions In The NYC album. This album will include selections that represent the many musical movements on which the House Music genre has evolved right up to the current time. Louie has a few special guests in mind to join him on the album as well, all of which will create unique collaborations that will launch the project into an area of worldwide interest. As one of the world’s longest independent dance labels, Nervous is well suited to present this momentous project.

It’s often said that great talent is in the DNA, and that’s most certainly the case with the Vega family. The A side of this 12” is “How He Works,” a blast of gospel – laced dancefloor energy that includes a stellar featured co-production with Nico Vega. The track has been buzzing buzzing massively ever since Louie debuted it at one of his sold out Expansions In The NYC events in New York. The 12” features two dubs, and fans will have to wait for the album to get the full club version.

The AA side include the peak hour gem “Can’t Slow Down” and the inspired “Vince Montana Tribute.” “Can’t Slow Down” shows Louie’s creative abilities at their best as he re-shapes a vocal from a Nervous Records classic house jam “Rushing” by Loni Clark, and with full approval and appreciation from the original producers Mood II Swing, re-creates something that will absolutely blow up dancefloors today. The “Vince Montana Tribute” (Louie Vega and Rick Wilhite from Detroit Rework) is a heartfelt and equally impactful production in which Louie demonstrates his appreciation for the disco sounds that he grew up on in the iconoc borough of Bronx, NYC.

Louie VegaCosmic Witch / A Place Where We Can All Be Free