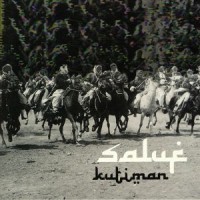 2019 was a busy year for Kutiman, he released several singles (including his collaborations with Turkish singer Melike Sahin and Rioghnach Connolly), as well as his Psychedelic Jazz Funk ep "Lines From Different Sources".
So it should come as no surprise that Kutiman's first release for 2020 is the monster "Saluf/Badawee", two track desert funk 7".

Both compositions on this limited edition vinyl are unmistakably in line with Kutiman’s psychedelic, heady funk-jazz musical legacy, but they also introduce a new approach in production esthetics and a narrative characterized by the essence of the region they were recorded in.

Saluf is an irresistible hypnotic middle eastern brain melter that is steadily building and charging with harmonizing synths and horns on top of dubbed out drums and handclaps. Think a pitched down Omar Soulyman instrumental meets Tinariwen in a smokey club and you’re getting close.

Known to be one of the highlights of the Kutiman Orchestra’s live sets and a certified crowd pleaser, capturing the spirit of Saluf in the studio was like capturing lightning in a jar. Those in the know will be more than pleased with the recorded outcome and those who are not familiar with the song, are in for a treat.

Badawee on the other hand is a new composition. A potent, slow burning, Middle Eastern head nodder that just keeps on giving. Kicking off with heavy drums and persisting cymbals to keep things steady, a rusty synth lead appears and followed by ethereal textured melodies that enhance the song to a blissful effect. Reverbed snares strike like thunder from a distant storm and the whole thing just takes off to the upper sonic spheres.