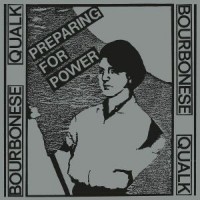 Mannequin and Platform 23 Records reissue what is considered to many the most complete album by perennial anarcho-outsiders Bourbonese Qualk.

The last recorded album at their South London squat, The Ambulance Station on the Old Kent Road, and again released on their own Recloose Organisation, saw the band develop further beyond the limits of the post-punk / industrial scene where genres increasingly became redundant.

Ethno, jazz, funk and EBM are all buried deep in the album as it seeks independence. The title, a critique of the Labour movements ineffective and limited call to arms against the prevailing Thatcherism of the mid-80s, encapsulates this wider oeuvre.

From opening Return To Order, the acoustic gloom is offset by tight musicianship and countering melody. The switch of Outcry precedes psychedelic anthem, Boggy Creek, with its VU remembrance. Blighted pulses Confrontation, Xenophobia, Backlash and closer, Insurrection, sense the darkness, but the ground has shifted forwards with the legendary 1.51 minutes of man'n' machine that is Lies, the enwrapping symphonic dub vocal of Born Left Hearted and incongruously pretty, Is It As It Was?

At times, suffocating, uncomfortable, at others light appears as history progresses. Preparing For Power is BQ at their most uncompromising and essential.