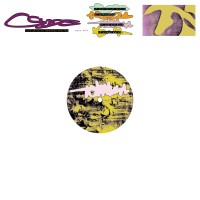 The music is totally out of this world. A mix of re-imagined dance music tropes, thrown chaotically into a simmering melee of digital interference and overdriven hardware, Opener, "Shuttlecock Fanfare" is as skippy a slice of dark side jungle as one could hope for while it's successor, "Trauerweide" defies any current genre boundaries entirely as it deploys analogue notes, heavenly pads and a concoction of holographic sfx into a completely unique musical form - superb!

"Sad And Done" ups the ante even more with creative bass plumes expertly mixed to formulate a heady space track that'll cause ripples of excitement both through nightclub dancefloors and your cerebral cortex with its tantalizing palette. "Mirage March" ends on a mournful precession through sparse, baron lands.

With programming flair akin to Monolake and an obvious obsession with modern technologies; SUDS have succeeded in grasping that rare magical place which pushes away all existing electronica tropes yet invites the listener into a friendly and evocative space. Masterful!

A1. Shuttlecock Fanfare
A2. Trauerweide
B1. Sad And Done
B2. Mirage March