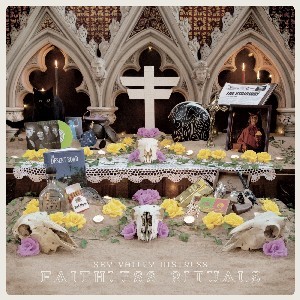 Included is a free 'Faithless Rituals' board game, 16 unique tarot cards, 4 Sky Valley tokens a game spinner and full instructions all housed in its own separate inner sleeve. Full download included as well.

Main CD package is a 4 panel digipack, with a 4 page booklet.

Sky Valley Mistress are 4 young upstarts from Blackburn, Lancashire, full of spit and vinegar who have delivered a ferocious, two fingered hello to rest of the world with their debut album 'Faithless Rituals'. Eight tracks of fierce passion and spirit, blistering stoner rock 'n' roll with huge riffs, buckets of fuzz and hooks guaranteed to nail you to the wall from the get go. Couple that with inciendiary playing one of the best female vocalists around ... you have one helluva debut album. In fact, SVM could easily hold their own against the likes of Jim Jones, Rival Sons, Royal Blood, BRMC or any other rockers greasy or otherwise.

Still only in their mid 20’s, you can only assume, on listening to their debut, that these young turks made that journey to those legendary crossroads and did the dirty deed with the dark one himself, such is the level of musicianship and vocal prowess on show here. The album was recorded at the legendary Rancho De La Luna, Joshua Tree, California, and co produced by, and featuring Dave Catching (Queens Of The Stone Age, Eagles Of Death Metal and Mojave Lords amongst others) and like all great rock 'n' roll it has vibe and attitude in spades. “I just wanna tell you guys a little somethin’ about this record. Somethin’ that you really need to know. I want this to perforate your eardrums, have a fight inside your head and leave a slow burnin’ fire in the darkest part of your mind. That will never let you forget what will be embedded inside you forever”

These are the words of Dave Catching (Mojave Lord, Eagles Of Death Metal, QOTSA), co-producer along with the band of the album. Dave’s intro opens ‘Faithless Rituals’, the debut album from Sky Valley Mistress. 8 tracks of full on hard, and heavy stoner rock, that is guaranteed to nail your ass to the wall from the get - go. 8 tracks of fierce passion and spirit. As Dave says … “Let it puncture your heart, bleed through your body and electrify your soul. Because this … THIS IS ROCK ‘N’ ROLL” Sky Valley Mistress are: Kayley “Hell Kitten” Davies (vocals), Sean “Starsky’ Berry (Guitar), Russell “Russell” Russell (Bass), Maxwell Harvey William Newsome III (Drums/Percussion)