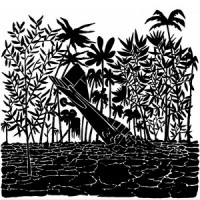 Kristian Craig Robinson, aka Capitol K, is a multi-instrumentalist and record producer with a long history in London’s most interesting under-the-radar music places and spaces. With a musical story like his, you can expect side streams. New record ‘Birdtrapper’ is “the sound of an initiation rave in a utopian hidden village”, and his latest exploration of Mediterranean audio mythos following from ’Goatherder’ (2018). The six track mini-album was similarly formed from ritualistic improvisations performed in Malta (where Capitol K was born), using homemade flutes, reed pipe, bamboo percussion, drum machine, bass guitar, but this time features a wider use of synthesizers, with the alternative dance floor in mind.

Where ‘Goatherder’ was an awakening of genetic primitivism, ‘Birdtrapper’ is an evocation of sonic bird callers, proto-rave abandon, ambient resonance and an ecstatic captive state, along with the previous work's visions of hunters, temples and scrub land music ‘Goatherder’ caused a quiet kind of quake and was beloved by The Quietus, BBCR3 and 6Music. Vinyl Factory described it as “like a series of manipulated field recordings that have an ancient, ritualistic quality … Goatherder shimmers with Balearic strangeness, rooted in an earthy outer-national dance music tradition” For the last seven years K has been behind the consoles at the heavily influential Total Refreshment Centre, recording and mixing records with the likes of Trash Kit, The Comet Is Coming, Rozi Plain, Alabaster DePlume, Dry Cleaning, Flamingods, Cykada, Ibibio Sound Machine, BAS JAN and John Johanna. It’s not just recording. He’s also become an influential if understated mentor to a new wave of producers and bands. His experience in studio environments is long and storied, including stints at Studio Plateaux on an island in the middle of the Thames and in the Royal Symphonia’s squatted rehearsal rooms