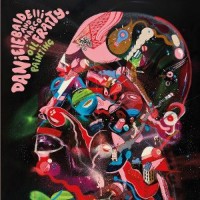 Both producers have a wealth of experience. Baldelli first to rose to fame as resident DJ at the near mythical Cosmic Club in the early 1980s, before moving into music production two decades ago. Since then, he’s collaborated with heaps of producers – most notably DJ Rocca, Marco Dionigi and Dario Piana – but “Oil Painting” marks his first collaboration with Frattini, an experienced producer whose bustling discography stretches right back to the Italian house explosion of the late 1980s and early ’90s.

The pair’s debut collaborative release is bold, bubbly, vibrant and funky, with the storied Italian veterans making extensive use of live instrumentation, vintage synthesizers and chugging, floor-friendly grooves. As you’d expect from a Baldelli-related project, the influences are obvious – think funk, dub-disco, cosmic rock, Italo-disco and nu-disco – but the resulting colourful cuts refuse to settle on one specific style.

Firmly focused on the dancefloor, “Oil Painting” is a gleeful, celebratory and excitable as anything either producer has released to date. For proof, check the surging arpeggio style synth-bass, kaleidoscopic synthesizer lines and eyes-closed rock guitar solos of “Automatic Amplitude”, the flute-laden dub disco shuffle of “Jasmine Flavour”, the organ-laden cosmic funk chug of “Oil Painting” and the lolloping disco-funk exuberance of “Steam Engine”, where crunchy guitar licks and Meters style organ stabs wrap themselves around a vintage disco bassline and head-nodding, toe-tapping drums.

The highlights don’t stop there, either. The percussion and delay-laden Afro-Cosmic funk fusion of “Slinky Funk” is a veritably tropical excursion that repurposes the bassline and incessant cowbells from Cymande classic “Bra”, and the Clavinet-heavy stomp of “Positive Flow”, whose snaking, constantly-changing saxophone solo and flash-fried guitar riffs helps create a thrillingly excitable mood.

From start to finish, “Oil Painting” is an album full to bursting with musical joy and umpteen giddy calls towards the dancefloor. From producers of Baldelli and Frattini’s experience, we’d expect nothing less.