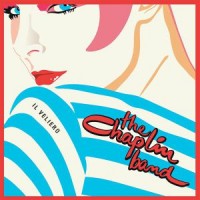 Originally entering the world via Pierrot Records in 1982, The Chaplin Band's take on Italian standard "Il Veliero" is the greatest dancefloor record ever made. I say that without the tiniest trace of hyperbole - it's an accepted scientific fact that the Dutch disco group gifted humanity its most uplifting, euphoric and incredible achievement back in the early 80s, and it remains unsurpassed to this day. A galloping groove, the perfect combination of a three note bassline and unrushed disco 4/4, palm muted rhythm guitar like Lee Perry in Spaghetti Western mode, buzzing synth tones and then that piano, tempted down from heaven to play the most emotional melody ever created. Uplifting but also melancholic, there is no end to the beauty here, or that groove.
For this, the first official reissue since '86, Groovin' have included "Dancing On Townsquare", the slick and smooth AOR disco cut from the original 12", as well as the boogie celebration of "Welcome To The Party", the opener from the group's 1982 LP.

A1. Il Veliero
B1. Welcome To The Party
B2. Dancing On Townsquare